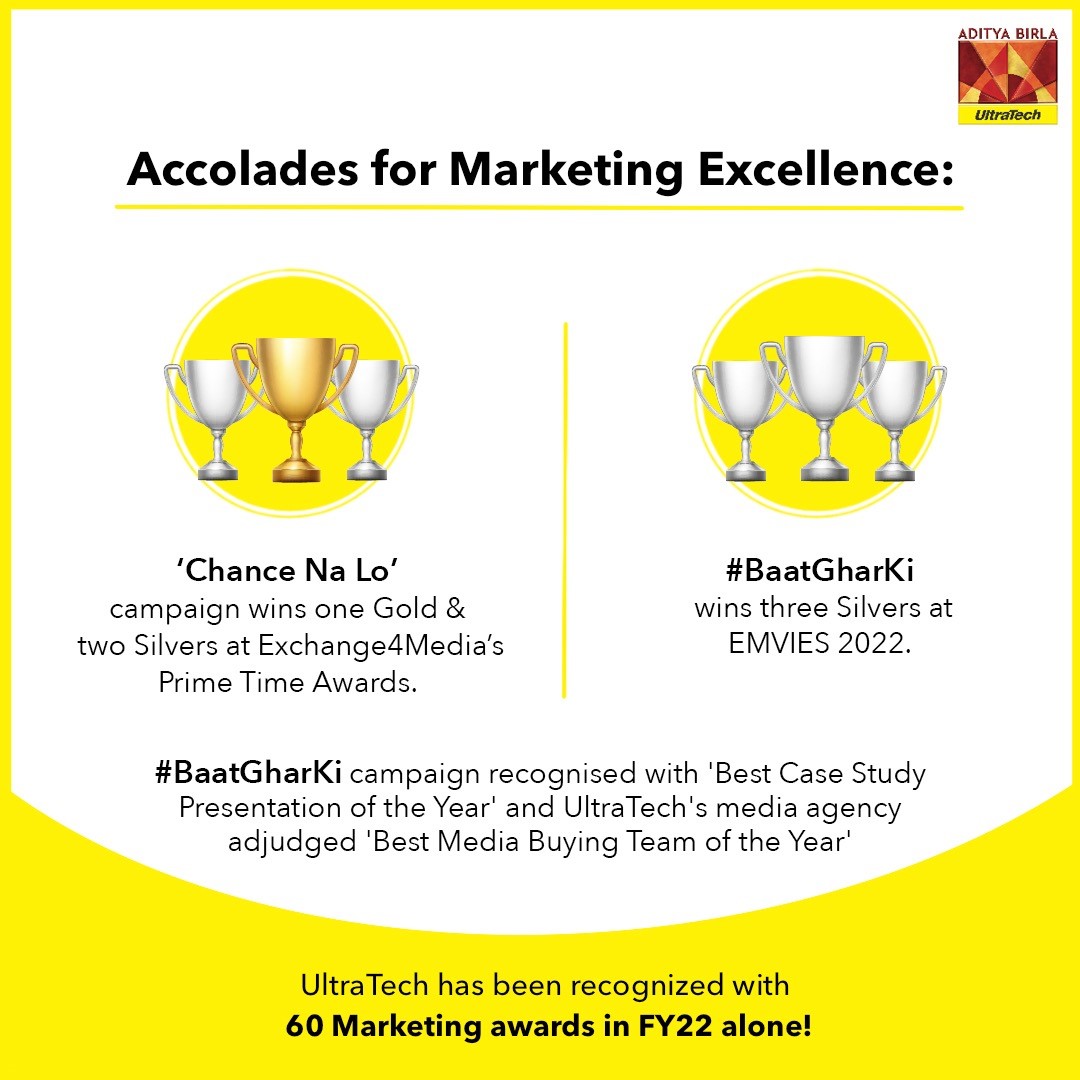 April, 2022: UltraTech won a Gold and two Silver trophies for its Chance Na Lo campaign at Exchange4Media’s Prime Time Awards. The gold trophy was conferred under the ‘Best use of influencers’ category. The two silver trophies were conferred on UltraTech in ‘Best Integrated TV Campaign’ and ‘Best use of TV to create brand awareness’ categories.

UltraTech Cement was conferred with these awards at a felicitation ceremony held virtually on 24th March 2022. The award is one of the most esteemed awards that honours excellence in Television Advertising that has significantly impacted the space and applauds expertise that goes behind curating an impactful campaign. Award entries were judged by a panel of experts from across companies on various parameters like strategy, creativity, execution and results. The Prime Time awards received over 300+ entries across various categories this year.

The 22nd edition of the EMVIES honours measurable and significant contributions of brands in the field of media. It distinguishes work that really stood out, made a significant business impact and are amongst the most innovative and creative in the marketing industry. The winning entries were reviewed by an expert panel of judges, which comprised of industry stalwarts in Marketing. The awards witnessed 1000+ entries this year.

The winning campaign, #BaatGharKi, was conceptualised by UltraTech, as the brand understands Individual Home Builders' (IHB) true motivation behind building a home. A home builder sees a home, not just as a structure but as an important life milestone. Most IHBs often feel the need for an expert to empower them in the process of building their first home. To address this need, UltraTech conceptualized the #BaatGharKi campaign. This campaign engaged with IHBs through a series of impressive television, audio, on-ground and digital content, including social media explaining the process of home building. This campaign has garnered positive responses from the IHBs and has won 59 awards across different platforms.

The #ChanceNaLo campaign, which bagged three trophies including one Gold trophy at Prime Time Awards, emphasises on the ‘irreversibility’ the right use of cement and drove the message in various contextual situations when the consumers are most susceptible to resonate with the messaging. Through this campaign, UltraTech urges home builders to not compromise in the choice of right cement as this is the most important decision in the process of home building. The irreversibility of this decision is key as it will determine the strength and stability of the structure.