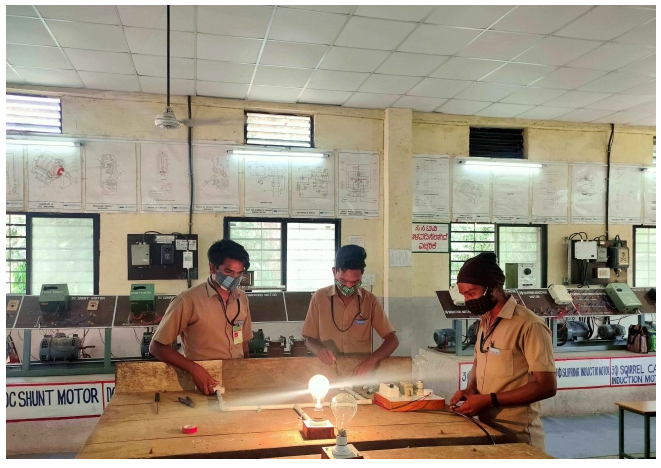 March 2022: UltraTech Cement’s Rajashree Cement Works' industrial training institute has helped provide new career opportunities to local youth. Bhimashankar Kolkur, is quite the poster boy for youngsters in Sangavi village, located in Sedam block of North Karnataka's Gulbarga district. The first in his village to enroll for the two-year Electrician course at the Kagina Private Industrial Training Institute (KPITI) in 2004, his example inspired others to seek livelihoods beyond farming. Now employed as an electrical technician at UltraTech’s Rajashree Cement Works (RCW), he earns a steady income, a distant dream for most of his counterparts a decade back.

For communities residing around RCW, the institute has been a boon in a region with limited income options. “Every year, at least three to four youngsters from my village join KPITI," says Kolkur, whose guidance is often sought by aspirants while applying for a course of their choice. “They hope that this will lead to something better in their lives."

It's not hard to see why. A majority of those living in Gulbarga hail from the local nomadic community. According to a baseline survey conducted in the year 1992, literacy levels in Gulbarga was much lower than the desirable level at a mere 33% and a school dropout rate of over 40%. Avenues for higher studies barely existed except at district headquarters and much farther.

Over the years, the setting up of six cement factories in Sedam and three in bordering Chitapur block has served as primary sources of employment. However, the lack of adequate technical skilling held back economic development and opportunities for growth for local people.

KPITI helped change all this, for good. Since its launch in 1996, the institute, managed by the Kagina Jan Seva Tust (KJST) – established by RCW – has emerged as a trusted name in technical skilling and employability in the 21 'adopted' villages around the Unit.

According to Ms. Chandamma Ambalgi, the CSR Manager at RCW, the institute has emerged as the most favored private ITI in Gulbarga. She says that the institute is both an enabler for direct employment at local industrial units and a stepping-stone for higher technical education and self-employment. An emphasis on quality education, practical training and internships at RCW, and a relentless focus on its core mission of improving economic conditions in the local community have been key factors behind its popularity, and the respect it commands today.

During the initial days, it was particularly challenging to convince families to send their youngsters to the institute. The principal of KPITI and members of RCW CSR team went door to door to create awareness in the local villages about the ITI. It took a while to allay their fears and convince them that this was in their best interests.

As the first private ITI in the region, KPITI started out with two-year courses each focused on the Electrician and Fitter trades. Subsequently, a two-year course for Electronic Mechanic and a one-year Welder course were also introduced. Today, KPITI has seven instructors, known as Junior Training Officers (JTO), who come with a B.E./Diploma or ITI qualification (with ATS – Apprenticeship Training Certificate and Craft Instructor Training Scheme, both issued by National Council of Vocational Training, under– Director General of Employment and Training, Ministry of Skill Development & Entrepreneurship) in technical education and a minimum of three years of hands-on work experience.

Admission into KPITI requires minimum 45% marks in Std X, and candidates need to take an entrance examination where the qualifying cut off is 85%. The fee structure at the institute has been framed in a manner so as to ensure minimal financial impact on the families of enrolled students. The fees also covers their expenses for uniforms, shoes, and subsidized snacks & meals. Fees at KPITI is significantly lower than what is charged at other private ITIs in Gulbarga, informs Indiresh Kulkarni, principal, KPITI.

Certification for the courses is Government approved. Upon completion, trainees undergo apprenticeship training in their relevant trades at RCW with a monthly stipend of Rs 7,000, post which they can earn a minimum average wage of Rs 15,000-18,000 a month in permanent employment. This helps them to recover their course expenses in a very short time.

With over one thousand three hundred and eight students passing out till 2021, the institute has helped power the economic engine in and around RCW's adopted areas in Sedam. Around 40% of KPITI trained youth are absorbed at RCW every year (including for apprenticeship, contract skilled laborers and permanent workmen) and rest find employment in other industrial units in Gulbarga or in other parts of the country after pursuing higher studies, and some choose self-employment.