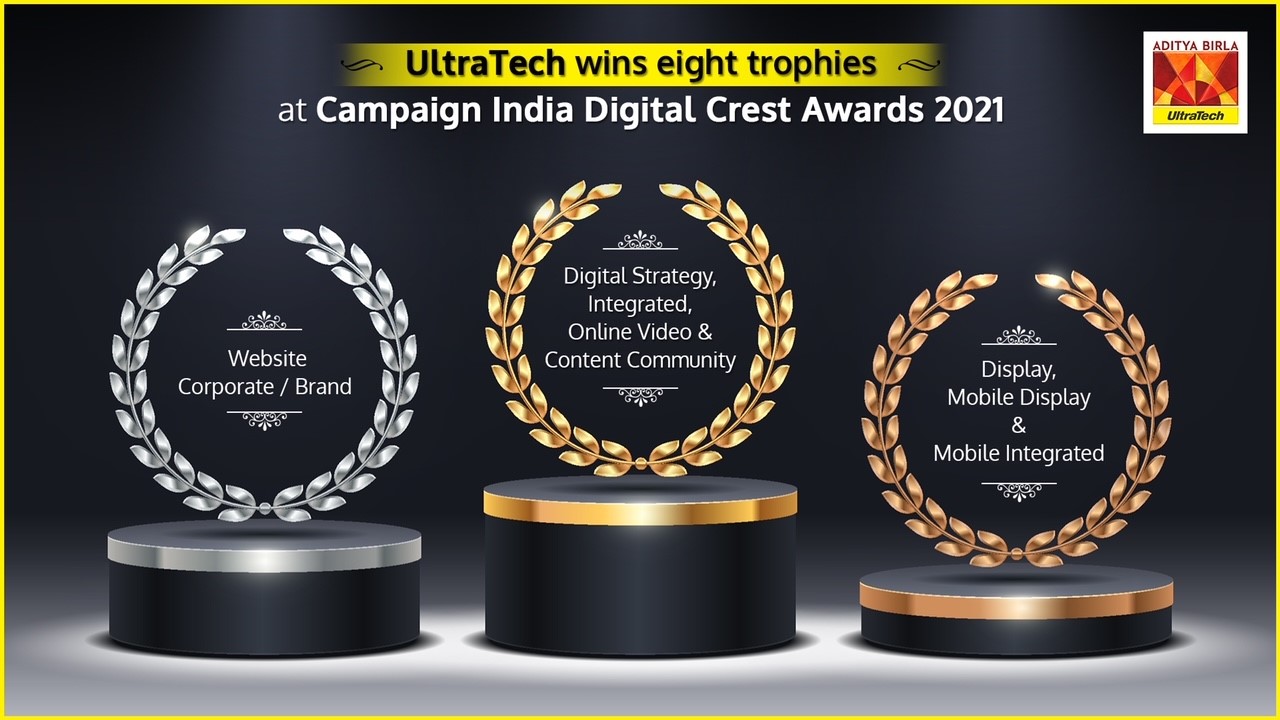 The four gold awards and one bronze award conferred on #BaatGharKi campaign at CIDCA adds to the multiple accolades the campaign has won so far. The campaign has so far won eighteen awards. UltraTech’s website won a silver at CIDCA for being an exhaustive repository of all homebuilding related knowledge in simple and user-friendly formats like videos, articles, tools and chatbots. The #ChanceNaLo campaign, which bagged two bronze trophies at CIDCA, emphasises on the irreversibility of the decision of using the right cement in the process of home building.

Campaign India Digital Crest Awards (CIDCA) is one of the most prestigious awards to recognize excellence in digital advertising and marketing. The award winners were shortlisted by a panel of industry experts. Winning campaigns were chosen based on their strategy, creativity and innovation, execution and impact. The awards were announced through a virtual event held on August 5, 2021.

UltraTech as a brand understands Individual Home Builders’ (IHB) true motivation behind building a home. A home builder sees a home not just as a structure but as an important life milestone. Most IHBs often feel the need for an expert to empower them in the process of building their first home. To address this need, UltraTech conceptualized the #BaatGharKi campaign. This award-winning campaign engaged with IHBs through a series of impressive television and digital content, including social media explaining the process of home building. #BaatGharKi campaign has won various awards in the past such as ‘Gold' at the Foxglove Awards 2019, Silver at SAMMIE Awards 2019, 'Silver' at EMVIEs Awards 2019, four awards at the Indian Content Marketing Awards (ICMA) 2020, ‘Silver’ at the Maddies 2020 – Mobile Awards. The campaign also won three gold trophies and 'Advertiser of the Year’ title at the Exchange4media Prime Time Awards. More recently, the campaign bagged five awards at Exchange4Media's Indian Digital Marketing Awards (IDMA) 2021.

Through the #ChanceNaLo campaign, UltraTech urges home builders to not compromise in the choice of right cement as this is the most important decision in the process of home building. The irreversibility of this decision is key as it will determine the strength and stability of the structure. The campaign emphasised on the ‘irreversibility’ the right use of cement and drove the message in various contextual situations when the consumers are most susceptible to resonate with the messaging. The Chance Na Lo campaign has recently won a bronze award at Exchange4Media's Indian Digitao  Website – Corporate/Brand l Marketing Awards (IDMA) 2021.