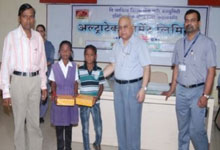 The CSR team at Awarpur Cement Works distributed academic performance awards to 22 top students from 10th and 12th standards, at the company premises on 31 August 2013. In addition, notebooks were distributed to 216 students from below-poverty-line families to arrest the dropout rate among students.
The CSR team also distributed educational material to 79 children from anganwadis. The team also organised a one-month summer tuition class for 10th standard students for English and Mathematics subjects between May and June 2013, which was attended by 37 students.